Abranosic Mihailo is a name on the monument in Garderen, the Netherlands, for the fallen Serbian WWI soldier who died in the Netherlands. When the researchers started their research concerning the fate of those  Serbian soldiers in May 2012 they could not imagine that 4,5 years later they would be in Carevac, Serbia, to meet the family of Mihajlo Avramović.

The research started with just the name on the monument in Garderen. Mihajlo’s name is written on this monument with other names under “begraven geweest in Enschede” which means he was buried in Enschede.

Photo below: Monument in Garderen (NL), with Mihailo’s name at the left, May 2014, click to enlarge.

The second step of the research started in the Dutch municipal archives. There his death certificate,  issued on 21/01/1919 by the municipality Lonneker, was found. During that time Lonneker was an independent municipality, and now it is a part of the municpality of Enschede. On his death certificate (1919 no 25,link) was written that he Michaila Abramowits from Zarewatz (Poserewatzki), age 39 died 20/01/1919 at around 11 o’ clock in Usselo. Also there was written that he was married to Lubitza Reiz. Most possibly he died of Spanish flu.

Lonneker and Usselo are small villages near Enschede which is in the East part of the Netherlands close to the German border. A lot of Prisoners of War arrived here during and just after the First World War. They were first received in quarantine camps from where they were further transported to PoW camps. 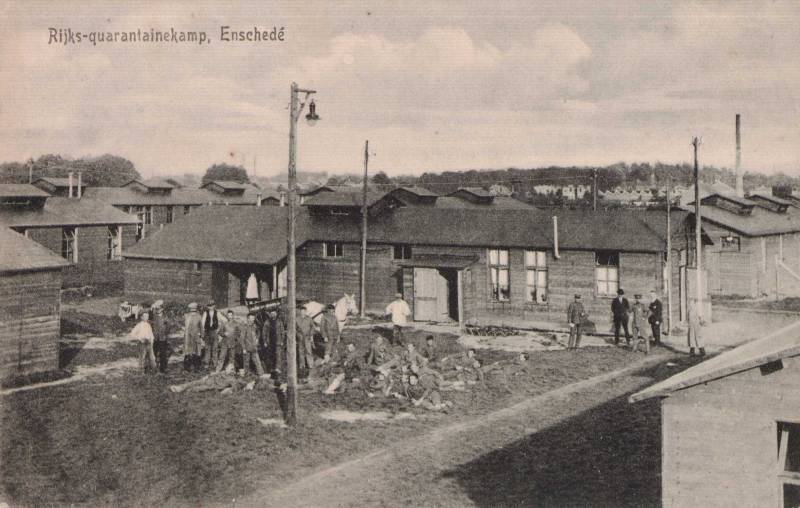 It could not have been established when and where from Mihajlo arrived in Enschede. Also in the database of the Prisoners of the First World War International Red Cross website (link) Mihajlo could not be found. Although it is known from earlier discoveries that most of the Serbian Prisoners of War spent time in camps in in the province of Hannover or in German the ‘Kriegsgefangenenlager des X. Armeekorps in Hannover’. Other soldiers who arrived in the Netherlands were held prisoners in the camps of the VII Korps Münster.

Mihajlo was was buried on the general cemetery in Enschede. His grave was exhumed and transported to Nijmegen, together with the other Serbian graves in 1938. His exhumation report mentions, besides his personal data, that his remains were placed in a lead box with the number 24 and that he was placed in a mausoleum in Czechoslovakia (Jindřichovice). The transport went from Nijmegen via the Dutch/German border at Wyler/Kranenburg. 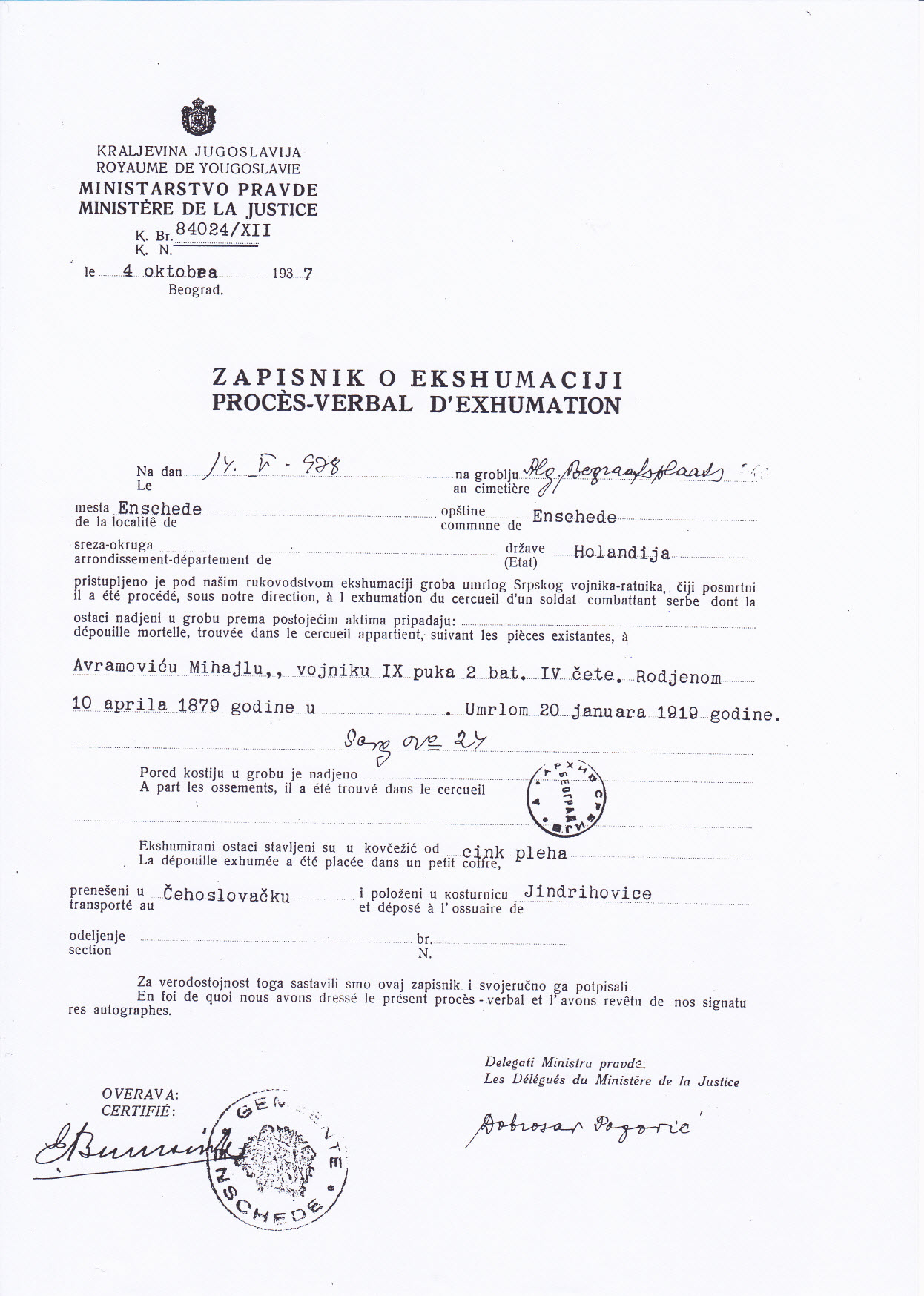 Mihajlo found his last resting place in Jindřichovice, together with 7658 other Serbian soldiers and 189 Russian soldiers (calculated as on 1940).

When the Association of War Veterans Descendants from Požarevac visited the monument in Garderen in May 2014 contact between them and the research team was established and maintained. A total of 12 Serbian WWI soldiers who died in the Netherlands came from that region (district Braničevo) including Mihajlo.

Below an Austrian-Hungarian map from 1906: Carevac (SRB) was located 11 kilometers from the Serbo- Austro-Hungarian border which was formed by the Danube river.

Until recently the family did not know where Mihajlo died exactly. They only knew that he died in the Netherlands. That is written on a memorial plate in the memorial chapel of the family – † u Holandiji (=† in the Netherlands). Mihajlo’s name is written below his brother Miladin who died in Kičevo (nowadays in Macedonia). The family did not know when Miladin had died exactly: it could be during the First or Second Balkan Wars, but most likely he died when the Serbian army retreated via Albania to the Greek island of Corfu.

Photo below, Carevac (SRB) 27/11/2016: Inside the memorial chapel of the family Avramović with Mihajlo ‘s name written (2nd from above) with behind written † u Holandiji (=† in the Netherlands). Click to enlarge.

From just a name on a monument in Garderen (NL), Mihajlo became a person with a family in Carevac, Serbia. Now, his descendants know that he died after the end of First World War in Usselo (NL) and that his resting place is in Jindřichovice (CZ). One day he kissed his relatives goodbye and headed to the war front to fight for ‘King and Fatherland’ and he was never seen again or heard of until we could trace his descendants in Carevac.

Photo below: the chapel of the family Avramović on the graveyard of Carevac (SRB), 27/11/2016, click to enlarge.

-Slavoljub Stojadinovic from the Association of War Veterans Descendants from the Braničevo region (website).

-Arjan Kapteijn (for the map).

Fabian Vendrig with the help of Tanja Vendrig and John Stienen.

Photo below: the painting made by one of the great-grand daughters of Mihajlo Avromović.