Milovan Milojević was born in 1889 in Azanja, a village in the Podunavlje district approximately 80 kilometres South-East of Serbia’s capital Belgrade.

When he had to serve his country he was part of the 4th company, 1st battalion in the 8th regiment infantry, his rank has been unknown until so far.

The village of Azanja paid a huge price during the Balkan Wars and the First World War: it lost almost 800 soldiers during these wars, so far only around 400 were traced back. Azanja was back then, and still is, a rural village so it must have been a huge impact when such a high amount of men died because of the wars.

Milovan was one of them, but also Djuro Stojadinović who died a day earlier in Nieuw-Milligen. Unfortunately we haven’t been able to find his roots in Azanja yet.

According to the Prisoners of the First World War International Red Cross website we know that Milovan was captured 14/11/1915 in Kruševac (Central-Serbia).

On 18/12/1915 he was reported in the Prisoners of War camp in Braunau (in Bohomia, nowadays the Czech Republic, back then part of the Austrian-Hungarian Empire). The list was written 21/01/1916, see below. Jindřichovice and Braunau were used as transit camps in the beginning of the war and the Serbian Prisoners of War were mostly transported further into Germany.

We know from earlier discoveries that they (Miloš Jeremić and Đorđe Vukosavljević) also spent time in camps in Soltau and Emden (in the province of Hannover or in German the  ‘Kriegsgefangenenlager des X. Armeekorps in Hannover’). Other soldiers who arrived in the Netherlands were held prisoners in the camps of the VII Korps Münster.

We do not know when Milovan arrived in the Netherlands, but at one point he was transported to the Prisoner of War camp in Nieuw-Milligen between Garderen and Apeldoorn. Also French soldiers were there waiting for transport to their home country, as the Serbian soldiers. We do not know when he was transported and from where (most possibly Enschede). According to the family we talked to he died on the train, but we cannot confirm this.

Below: detailed card from the website of the Prisoners of the First World War, historical archives.

His death was registered by the municipality of Apeldoorn (act 71, date 23rd January 1919). This was reported by Jan David Mathias Schlaepfer, 49 years old Sergeant-Major in the Dutch army. Hendrik Muis, 45 years old civil servant, was the second person who registered his death.

Below you can see the autopsy report of the doctor who confirmed his death on the 21st January 1919.

Milovan was buried on 24th January 1919 together with 11 of his comrades in Garderen (municipality of Barneveld). On the cemetery where he was buried a monument was erected in April 1919 by the legation of the Kingdom of Serbs, Croats and Slovenes in the Hague.

In May 1938, he was exhumed (together with the other Serbian WWI graves) and transported to Jindřichovice. The exhumation report can be found below. Even though the newspaper articles in 1938 mentioned that the remains of ’89 Serbian soldiers’ were repatriated to ‘Yugoslavia’, the official documents of the time mention ‘Czechoslovakia’ as the destination. 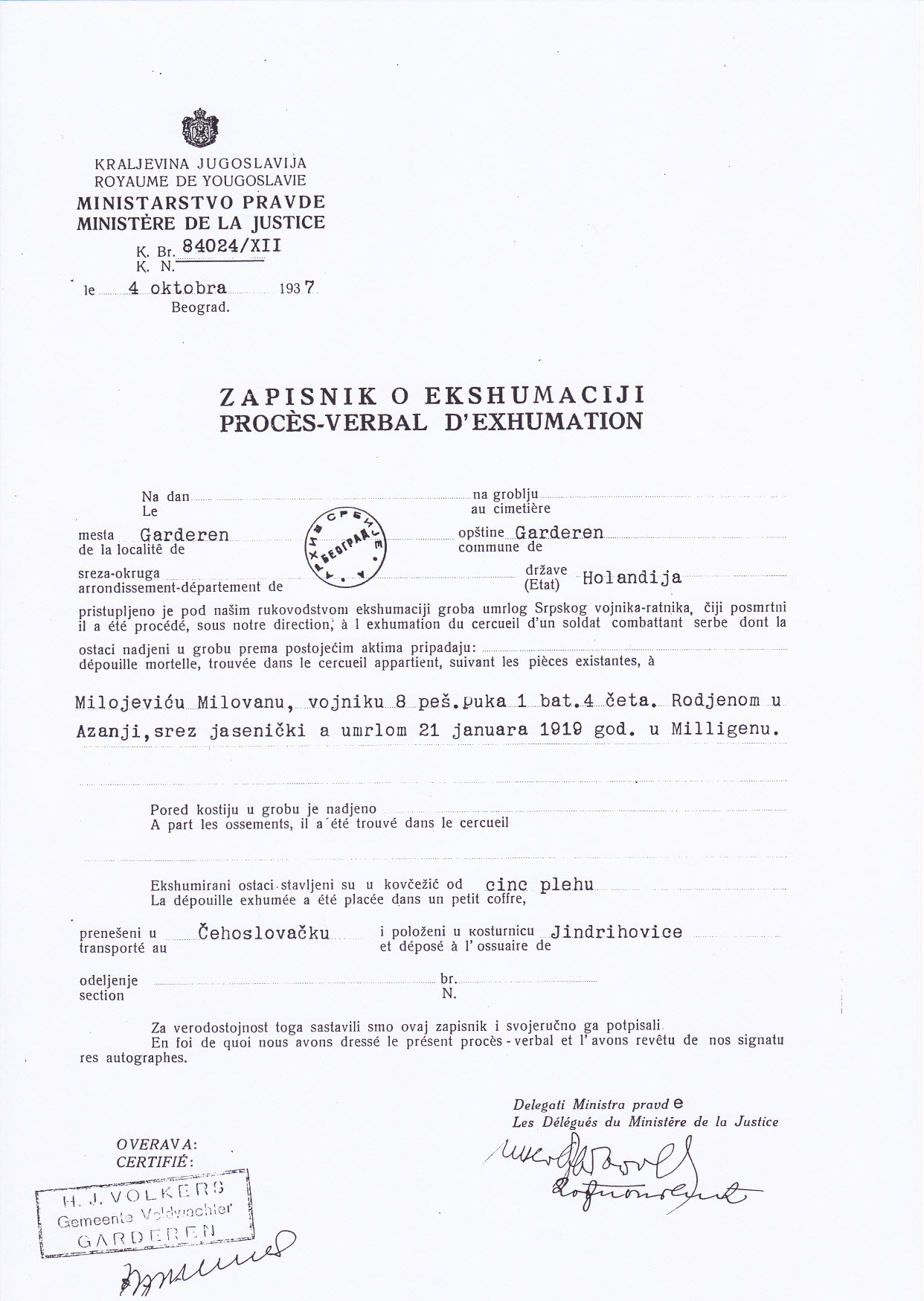 The remains of Milovan and 87 others were transferred to Jindřichovice in Czechoslovakia (nowadays Czech Republic) via the Dutch/German border at Beek-Wyler. It is not known in which box his remains were collected as on his Serbian exhumation report (no K. Br. 84024/XII) it is not mentioned. It must be one of the lead boxes numbered 45, 61-65, or 67-89 as for the other numbers the names were mentioned.

Milovan found his last resting place in Jindřichovice, together with 7658 other Serbian soldiers and 189 Russian soldiers (calculated as on 1940).

After contacts with officials of the municipality of Smederevska Palanka (Azanja is part of that municipality nowadays) we got the contact information of Žarko Talijan which we contacted afterwards. He wrote a book about Azanja and the victims of the Balkan Wars and the First World War and wanted to meet us. When we met 19/03/2016 in Azanja he showed us, together with a relative of Milovan, the monument on the graveyard of Azanja.

Picture below: Monument for Milovan on the graveyard of Azanja (Serbia), 19/03/2016 (Photo by Fabian Vendrig).

This was actually the first monument we have seen so far where it was written where the soldier died.

Translation: Milovan, a son of Stepan Milojević, a soldier, lived for 30 years, died 6.1.1919. in Miligen in the Netherlands. The monument erected by his bereaved father, brothers, son and wife.

Conclusion
With the help of the civil servants of Smederevska Palanka we contacted Žarko Talijan and together with Damir Živković they gave us the information we needed.

We met a family member and gave copies of the official Dutch & Serbian acts and pictures of the monument in Garderen and the mausoleum in Jindřichovice to him. At least now they know that he has not been forgotten and that his name is written on the monument in Garderen, that there is a cross for him as well there and that his remains are in the mausoleum in Jindřichovice.

We are very grateful for the picture of Milovan, as he is now not just a name any more, but a person with a face and a history. He died in the Netherlands with his comrades far from Serbia, but 100 years later both countries did not forget him and his comrades.

Photo below: The cross in Garderen (NL) with Milovan Milojević’s name, 22/05/2014. Photo by Fabian Vendrig

-Damir Živković who helped to write the part about Azanja.

Fabian Vendrig with the help of Tanja Vendrig, John Stienen and Damir Živković.