In 2001 an article appeared in a history book about Garderen (“Landmark in the green”). The article by Dick Veldhuizen describes a monument that was erected to the memory of the Serbs who had been buried there in 1919, and a bit of the history of how they arrived there, why they died and how they were transported to Czechoslovakia in 1938. 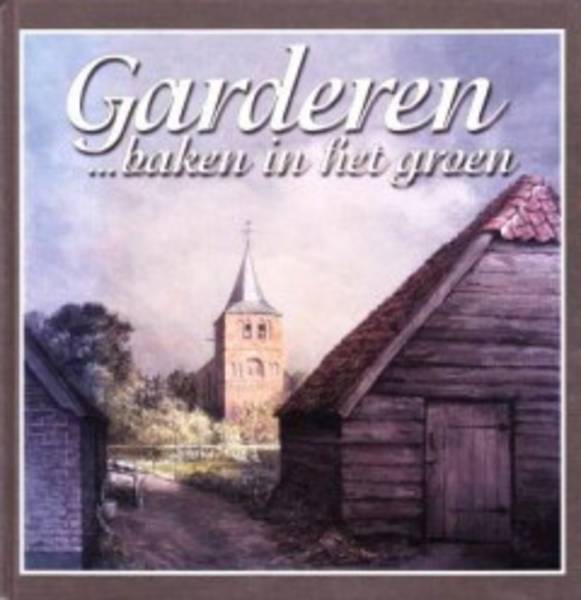 From 2006 onwards, the original monument in Garderen, featuring the names of 29 Serbian soldiers ‘who died for the Serbian fatherland’, has been restored and extended. In the following years, names of other victims have been added, for 14 who died in Enschede and Usselo and had been buried in Lonneker, and for the Serbs who died and were buried in Nijmegen.

In 2011, another article was published online by Nel van As (“Death in the barracks”), featuring more details about the victims in Enschede and Garderen.

Based on these sources, and with the help of the various people involved in these earlier publications, we started our research. Much information was available in newspaper articles dating from 1917-1919 and 1938, which are available online at the Dutch Royal Library in The Hague and at the Regional Archives in Nijmegen. According to these articles in 1938 a total of 89 bodies had presumably been exhumed, brought together in Nijmegen, and finally transported to Germany. The exhumations allegedly took place in Barneveld (Garderen: 30), Nijmegen (21), Lonneker (Enschede: 17), Dordrecht (15), Hengelo (3), Rotterdam (1), Borger (1), and Amersfoort (1).

Based on this information we systematically searched in the archives of the places mentioned and found death certificates of Serbian victims in: Apeldoorn (29, there was a duplicate for Dragan Dimitrijević), Nijmegen (21), Dordrecht (15), Lonneker (Usselo: 10), Enschede (7), Hengelo (3), Rotterdam (2), Borger (2), and Amersfoort (1). This means that for Enschede a total of three names were found than featured on the monument. In Rotterdam and Borger respectively one more victim was found to have died than the one grave per city that was exhumed in 1938.

Another article from 1918 lead us to a death certificate of an unknown Serbian soldier in Beerta, bringing the total number of Serbian soldiers who died in The Netherlands between 1917 and 1919 to 91.

Even though the newspaper articles in 1938 mentioned that the remains of the Serbian soldiers were repatriated to ‘Yugoslavia’, the official documents of the time mention ‘Czechoslovakia’ as the destination.
The final stage of the research took us to Belgrade, to the Archive of Yugoslavia, where various files were studied, between 1920-1940 of the various Ministries of the Kingdom of Serbs, Croats and Slovenes and the Kingdom of Yugoslavia: the Ministry of Foreign Affairs, the Ministry of Justice (responsible for war graves), the Ministry of Religion, and the Legations of the Kingdom in Paris and Brussels. In these archives we found two crucial files: the one on exhumation (found in Paris and Brussels) and one on War Graves (found in the Ministry of Justice archives). Later we found the exhumation reports in the Archive of Serbia in Belgrade. Thus we could establish that 88 of the 91 Serbs who died in Netherlands in 1919 found their final resting place in a mausoleum in Jindřichovice. 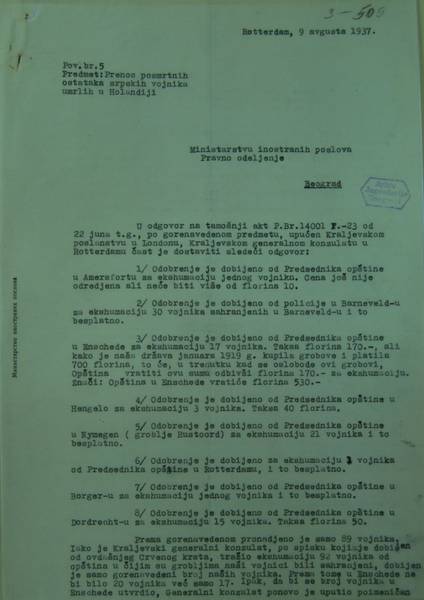 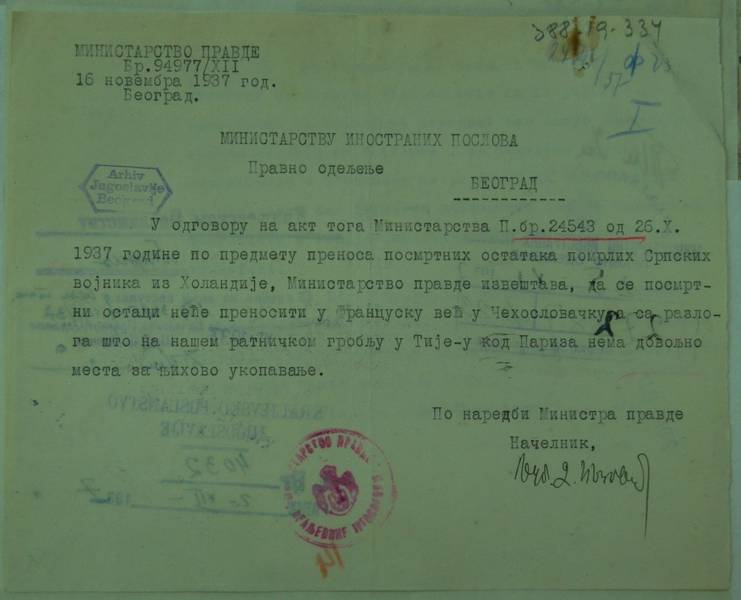