Dragomir and Sreten Rajičić were tradesmen from Gornji Milanovac who were repatriated via the Netherlands following captivity in Austria and Germany during World War One. Before the war their father, Vladimir Rajičić (1854-1912), was running a bookshop on Karađorđeva 9 Street in Gornji Milanovac (above, on the left) trading in books, office supplies, and publishing postcards. Besides these two sons, Vladimir and his wife Jelizaveta (image below from their grave in Gornji Milanovac) had two daughters, Ljubinka and Milica, and three more sons, Radomir (1892-1961), Tihomir, and Ranimir.

Sreten, born in 1889, was a noncommissioned officer in the 2nd company, 2nd battalion, 10th Regiment Infantry, based at Čačak. He was part of the first ban, which consisted of able-bodied men of 21-31 years old. Sreten became a prisoner of war in Kuršumlija on 3 November 1915, during the Serbian retreat towards Vido (Greece). Kuršumlija was strategically located on the road from Niš to Priština, that continued to Albania via Montenegro and then to Greece. From Kuršumlija he was transported to the Austrian prisoners-of-war camp at Braunau, which was located in the North-East of Bohemia, close to Silesia (nowadays in Czech Republic).

Đorđe Stojanović, from Klenje near Golubac, belonged to the same group that was transferred to Braunau, where he spent one month. When interviewed by the Dutch journalist Henri Habert in the summer of 1918, the then 27-year-old describes the circumstances in Braunau as follows:

The Serbian prisoners there were doing bad. Nothing was good there. The food was very bad and insufficient, and we had no straw ticks nor blankets. Only the bare wood plank floor of the barracks. The guards behaved like wild beasts.

From the camp in Braunau Sreten Rajičić and Đorđe Stojanović were among the first group of 1200 Serbian soldiers who were transported to Soltau (Germany). They arrived on 23 January 1916. This transfer between the Austrians and Germans was part of a scheme where the Austrians received wheat from their German allies and Austria delivered Serbian rank-and-file soldiers as cheap (forced) labor in return.

The French athlete and rugby player, Géo André, who competed in the 1908 and 1912 Olympic Games, saw the arrival of the Serbians in Soltau. He describes it as follows:

During my stay at Soltau, I witnessed one of the saddest sights I have ever seen: the arrival of the Serbians. I will never forget that gruesome parade. Emaciated, tottering, haggard, they lingered. The few kilometres’ walk from the station used up their last strength; all they wanted was to get a suitable place and drop down.

Moved by the desperate look in their eyes, we gave them some bread, any kind of food. The sentries rushed over to them to prevent them from accepting and threatened them with bayonets. But the Serbians, less passive than the Russians, stood up, with sparkling eyes, and their pride rebuffed their jailers.

Sreten’s older brother Dragomir was a medical orderly in the Serbian military medical service. He also became a prisoner of war, but his journey brought him to the Austrian camp of Heinrichsgrün, in the North-West of Bohemia, first, and then to Soltau, where he arrived on 21 May 1916.

It is likely that Sreten was employed outside the camp in an Arbeitskommando, either in agriculture or in industry or mining, and that Dragomir was employed inside the camp, because of his wartime medical specialisation. Therefore, the chances are very small that they spent extended amounts of time in the camp together.

On 12 April 1918 Dragomir sent a postcard home, to his ‘beloved and dear sisters’ Ljubinka and Milica. On the front there is an image of prisoners of war under a sign in Romanian (!) stating prizonieri(‘prisoners’) 1916/1917. Indeed, the Romanian prisoners of war arrived to the German camps between October 1916 and January 1917. There was a small number in Soltau as well. However most, if not all, soldiers depicted on the image are Serbian, which can be seen from the specific Serbian headwear, or šajkača, worn by the men.

Dragomir, who signed with ‘Drag.’, sent the card ‘as a memento’ (he underlined those words).

After the armistice came into effect on 11 November 1918, the Serbian prisoners of war were repatriated. The Serbians from Soltau were sent to the Netherlands via Friedrichsfeld (near Wesel, close to the Dutch border) and then to Nijmegen by boat. Thus, Dragomir arrived to Nijmegen on 13 January 1919 on board of the Rhine Steamer ‘Blücher’. The next day he was directed to Nieuw-Milligen, to a transit camp.

Already on board of the ship the first soldiers had shown symptoms of Spanish flu. Within a week the epidemic was so severe that the national press was sending their reporters to cover the story. As a medical orderly Dragomir was employed by the camp to treat the Serbian and French patients there.

In the meantime, Dragi’s brother Sreten had arrived in Enschede. He too was ill with Spanish flu. He was sent to Ziekenzorg general hospital located on the Veenstraat. 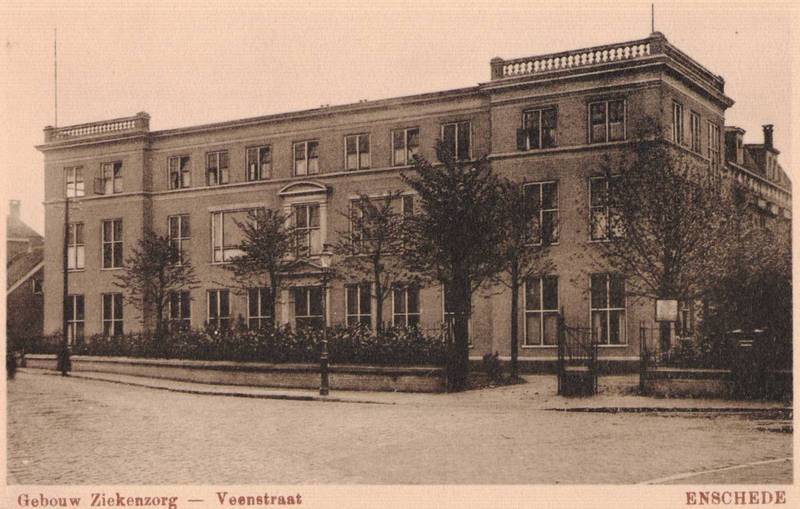 Sreten died there on 22 January 1919 at thirty minutes past midnight.

On 24 January in the morning, a section of Dutch soldiers led by Sgt. Lesman was posted on the corner of the street leading to the general cemetery to accompany Miloš Obradović, Stojan Đorđević, Božidar Radovanović and Sreten Rajičić on their final voyage. Muffled drums accompanied the graveside processional. Volley shots were fired as a salute, both upon arrival and over the graves, which were covered by four wreaths.

Dragomir was present at his brother’s funeral and let a hand-full of earth fall onto Sreten’s coffin. A total of 16 Serbians were buried in Enschede during the post-war repatriation.
Rotterdam

At the end of January, Dragomir (slightly to the left of the centre of the picture, which was taken on 5 February) was transferred to help at the Auxiliary hospital for Serbians and Portuguese in Rotterdam.

Along with the last recovered flu victims Dragomir was repatriated from Rotterdam via France in February 1919.

On 19 August he sent a letter to the widow of Đorđe Vukosavljević in Kragujevac, to inform her of the death of her husband:

Dear Madam, I consider as my humankind duty to inform you that your husband Mr. Đoko died in Milligen from flu and that I was accidently there with my brother who also died. I had known Đoka since 1917 and he asked me then on his deathbed to inform you about his death.

Please, I would like to apologize for not informing you earlier about his death, but please be convinced that only three days ago I arrived home after four years.

It had taken him half a year to get home from Netherlands.

Đoko had also been in Soltau. You can read his story here.

Ten years after the end of the fighting in World War One, on 11 November 1928, the members of the transport column of the Enschede local branch in of the Dutch Red Cross laid palm branches on the graves of the allied soldiers who had died during World War One. The president of the transport column, and burgomaster of Enschede, Edo Bergsma (standing, on the left), spoke a few words in memory of those who died.

On 14 May 1938 the remains of Sreten Rajičić were exhumed in Enschede by a team of gravediggers from the protestant deaconry of Nijmegen lead by the Yugoslav inspector Dobrosav Popović.

Sreten’s earthly remains were put in a zinc coffin with number 26, which was transported from Enschede to Nijmegen. From there the 88 coffins were transported to Germany on 18 May, after which they were laid to rest at the Serbian mausoleum in Jindřichovice, where they remain until today.

After the war Dragomir Rajičić continued his father’s business with a bookshop and publishing house for postcards in Gornji Milanovac, but on Ljubićska Street (the shop on the right on the postcard below, which was published by him).

Initially only Sreten Rajičić was part of our research. When his death was reported in Enschede, it wasn’t even recorded where he was from, or who his parents were. This left us with very little clues on his identity.

As a result of our research we were contacted by the great-granddaughter of Đorđe Vukosavljević, who possessed a letter written by Dragi Rajičić (displayed above). Then, still there was not more than a similarity in names, and the fact that Dragi had been in Netherlands and lost a brother. In preparation of our brochure (see here) we discovered the WWI archives of the International Committee of the Red Cross, which hold information on the captivity of both brothers.

In 2017 we found the 1918 postcard from Soltau in Milan Radovanović’ book on the International charity for the wounded and prisoners of war, which led us to the home address. Then we found further evidence in two books about Gornji Milanovac, with the kind help of Ana Jelić of the Museum of Rudnik and Takovo Region.

Finally, Dragomir’s name was mentioned as ‘Serg[eant] Raïtchich’ on the backside of the image taken by H.A. van Oudgarden in Rotterdam on 5 February 1919. Besides a confirmation of his visual appearance, the picture helped us to reconstruct his route in Netherlands: Nijmegen – Nieuw Milligen, a visit to his brother’s funeral in Enschede, back to Nieuw Milligen and then to Rotterdam towards the end of January, after which he was repatriated via France early February.

Sreten was mentioned in the 2005 book about the victims from Rudnik and Takovo Region who died in the wars of 1912-1918. Unfortunately, we were not able to trace back family from the brothers Rajičić so far, neither could we locate a monument in Gornji Milanovac with Sreten’s or Dragomir’s name, but one day we hope we will.

Story by: John Stienen with the help of Tanja & Fabian Vendrig.