14/01/2017: Tracing non-Serbians who were repatriated via Netherlands: Édouard Roland

Édouard François Georges Roland is born on 23 April 1884 in Craon in France, a town with a few thousand people. There, 300 kilometers southwest of Paris, he works on the land in the nearby town Pommerieux. 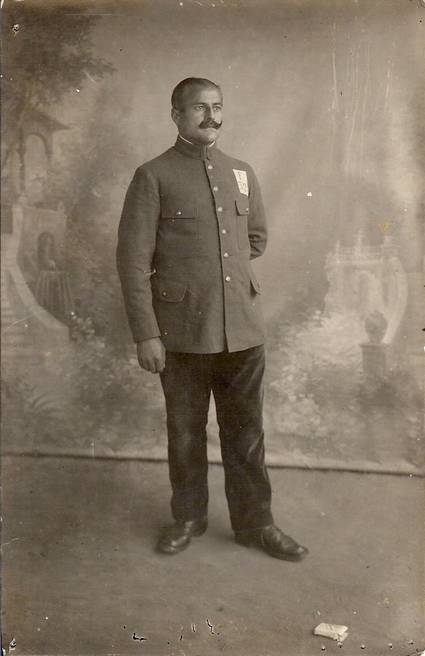 He was 30 years when the First World War broke out and he was mobilised as a sapper in the first regiment of the Engineering Arm of the French army. He left his wife Augustine and their 6-year-old son behind. He would never see the little Edouard, named after him, again. His regiment was first stationed at Versailles. From there, the soldiers left for what would be known as the Battle of the Frontiers, a series of battles in the Ardennes and Alsace-Lorraine.

His unit withdraws during the Grande Retraite and fought in the infamous Battle of the Marne. In the front line Roland digs trenches, chopping with an ax in the undulating fields. In the trenches the soldiers hide from enemy fire or attack the enemy with rifles and bayonets, often to gain but a few meters of soil. Millions of Frenchmen, Britons, Belgians and Germans are killed in trenches and dug out passageways, such as those carved with hand tools by Roland and other sappers.

But Roland does not stay behind lifeless on a field strewn with bodies and munitions debris. He was taken prisoner on September 7, 1914 by the Germans and sent to a camp in Germany, the Haus Spital, northwest of the city of Münster, just across the border with the neutral Netherlands. A year later, he sends a picture of Kolberg on the Baltic Sea, where he is employed in an agricultural labour company. 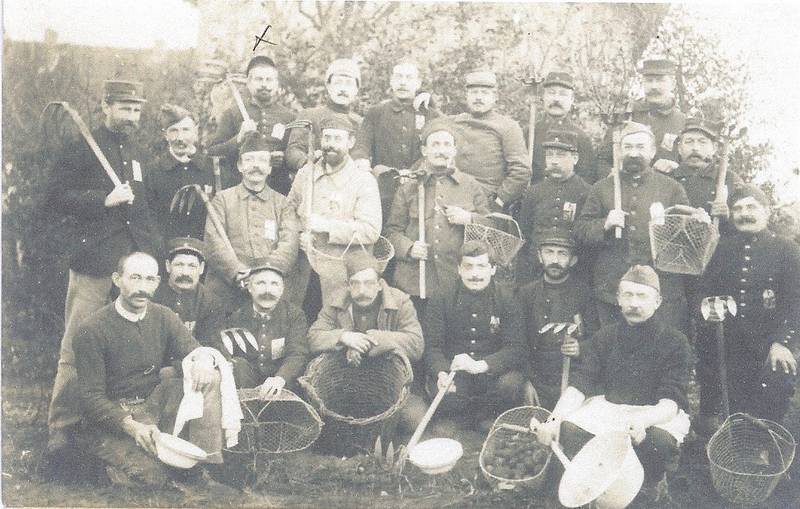 On 11 November 1918 the First World War officially ended. In a forest near the French town of Compiegne, about eighty kilometers north of Paris, the truce was closed. The war has cost the lives of nearly ten million soldiers, injured tens of millions of young men and hordes of women and children were forced to flee.

Germany is on the brink of a humanitarian disaster. The prisoner of war, hundreds of thousands, have been left to their own devices, the food becomes more scarce every day and the Spanish flu takes the first of its millions of victims. The Allies decide to repatriate hundreds of thousands of prisoners of war via the Netherlands, which agrees reluctantly.

Soon more prisoners of war arrive in the Netherlands than can be shipped home – due to lack of trains and coal. In early December the government therefore starts the temporary billeting of prisoners of war in transit in temporary camps and other facilities. Roland is also repatriated. On his way home, he arrives to Enschede on 4 December 1918. He writes to his wife Augustine that he is healthy and that it won’t take long before he’s home.Roland ends up in a camp in Nieuw-Milligen in Apeldoorn, where several thousand mainly French and Serbian soldiers are put up in a month’s time. As on 22 and 24 December a batch of French soldiers leave the camp, only twelve Frenchmen remain sick in the camp. Three of them die: Raphael Joseph Devaux from Auchylez la Bassée, Pierre Galy from Montpézat and Roland, on 2 January 1919. 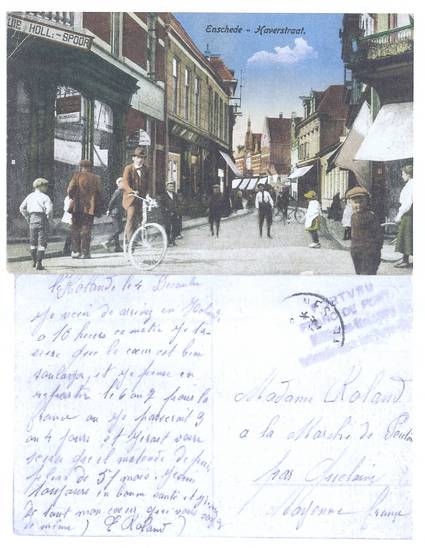 The camp commander reports in the weekly report: “Roland deceased in the camp hospital. The coroner notes two days after Roland’s death the cause of death as “miliary tuberculosis”, a still incurable bacterial infection. A week later the Spanish flu breaks out in the Dutch camps. During this epidemic another six Frenchmen die along with thirty Serbians, one of whom in the Military Hospital in Amersfoort.The French are almost all buried at the Roman Catholic cemetery in Apeldoorn. The bodies of two of the nine deceased French are transferred to France in 1923. Roland and the other six are exhumed in the summer of 1935 and reburied in Soesterberg. That serves as a gathering place for about 200 French victims of the First World War, primarily civilian refugees but also fifteen soldiers. As a widow, Augustine received a payment of 150 francs after the war. She never heard where the grave of her husband was.

His descendants kept on looking for the grave, and kept on enquiring the French and Dutch authorities. Once more in 2014, on the occasion of the 100th anniversary of the war. While we were researching the Serbian soldiers, we had come across the French. So in 2014 we could inform the authorities of the cause of death. But not of the location of the grave. The grave, eventually, was rediscovered at the end of May 2016, when Roland’s name was noted to be on the grave stone in Soesterberg. 70 year-old grandson Édouard promptly replied to the unexpected and good news: “Mille fois MERCI MERCI MERCI” and travelled to the grave in autumn. 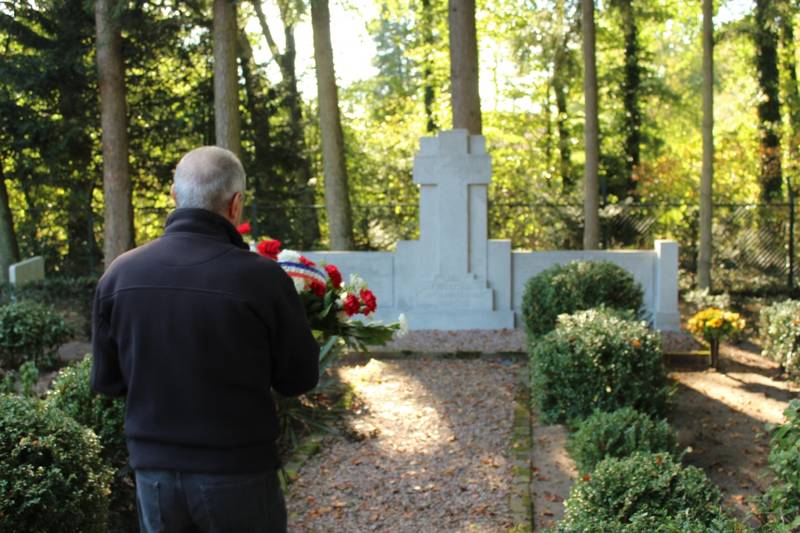 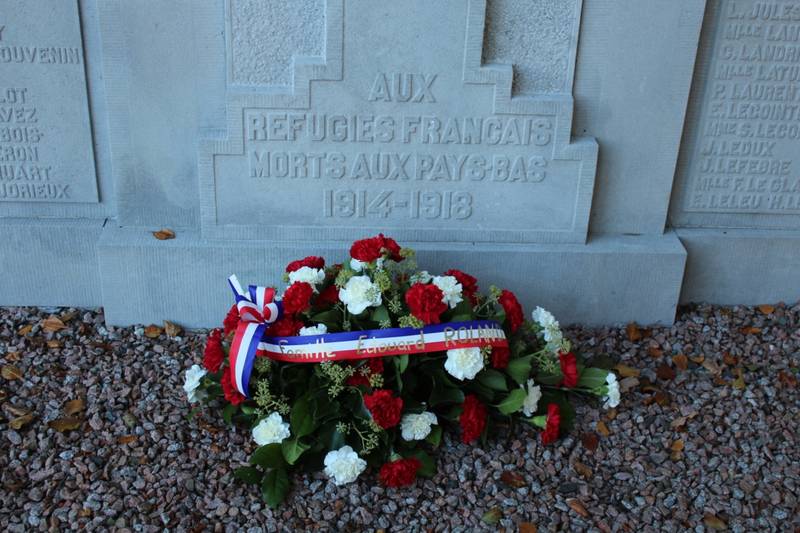 This text is inspired by the article Diepgeroerd door vondst graf opa in Soesterberg, by Remco Reiding, which was published on 16 September 2016 in AD/Amersfoortse Courant.
Categories: New discoveries

Today we finished the reconstruction of the fate of two brothers, Dragomir and Sreten Rajičić from Gornji Milanovac, who both ended up in Austrian and then German captivity, and both came to Netherlands after the Read more…

The discovery was already made in August 2017, but now there was time to write and publish the story about Dragutin Milutinović from Brović. For the full story click here (link).

We are proud to announce that we have found the descendants of Radosav Jovičić in Veliki Borak (SRB) who died in the Dordrecht (NL) on the 26th January 1919. As researchers you need sometimes luck Read more…