On 28 January 1919 the death was reported in Apeldoorn of the Serbian Dragan Dimitrijević. He died on 27 January 1919 at 4 AM. According to his post-mortem examination het had died of “Spanish flu with pneumonia”.

On 29 January he was buried in Garderen, in the common grave where all Serbian soldiers who died in the army camp near Milligen are laid to rest.

On 29 or 30 January, the commandant of the “New-PoW camp Milligen”, captain W.G.M. Gaillard, found out that a mistake must have occurred. In the field hospital Dragan Dimitrijević had woken up from his severe illness. It was not him, but Vasilije Simonović who had died on 27 January. The two men had been confused, but the dead had been buried in the meantime.

The same coroner, who performed the autopsy on January 28, produced a new statement on January 30 in which he declares that Vasilije Simonović had died, on January 27 at 4 AM, of Spanish flu with pneumonia.

On January 31 Edward Townsend, aged forty-five years, administrator of the prisoner of war camp, together with Hendrik Mus, usher, went to Apeldoorn to declare the death, on 27 January 1919, 4 AM, ofVasilije Simonović. The municipality of Apeldoorn subsequently forgot to destroy the death certificate of Dragan Dimitrijević.

Although he has been repatriated and probably resumed his life in Serbia, Dragan Dimitrijević was, according to the Netherlands, officially dead.
When the Yugoslav government in 1931, through the Dutch Ministry of the Interior, asked in which town the Serbs were deceased between 1916 and 1919, they thus received a list of 30 names from Apeldoorn, including the one of Dragan. The Ministry of Justice in Belgrade in 1937 prepared exhumation reports for all Serbs whose remains were buried in Garderen, and other places, including one for Dimitrijević.
When on 13 May 1938 the Yugoslav representative, inspector Branko Popović, came to Garderen to open the graves so that the remains could be transferred to a Serbian mausoleum in Jindřichovice, he discovered that not 30, but 29 Serbs were buried in Garderen. Because the name of Dragan Dimitrijević was not on the monument that had been erected in 1919 next to the mass grave, the exhumation report intended for him was not filled out. 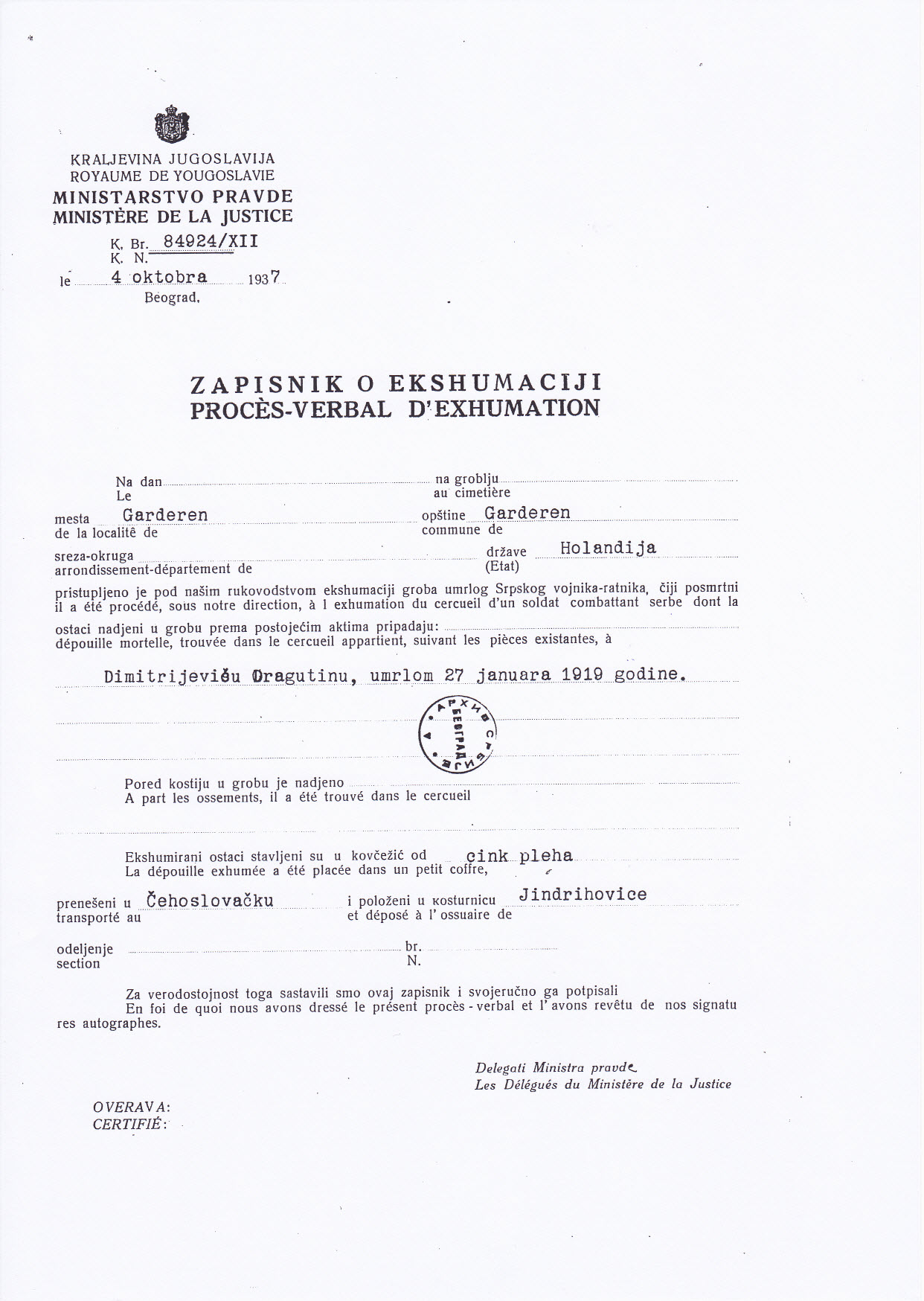 In 2006 the monument was restored and the names made readable again. When in 2013 it was decided to erect symbolic crosses on the graves with the names of the men who had had their graves there, the same problem occurred as 75 years earlier during the excavation and relocation. Again, there were, according to the municipality of Apeldoorn, 30 Serbs who died at Milligen and only 29 buried in Garderen – and from there transferred to the mausoleum.

Only in late December 2015 the mystery of Dragan Dimitrijević was solved, when at the National Archives in The Hague the weekly reports from 1918 and 1919 of the New PoW Camp Milligen were discovered, which showed that Dragan Dimitrijević had no grave because he did not decease in the camp. He had been taken for another victim.